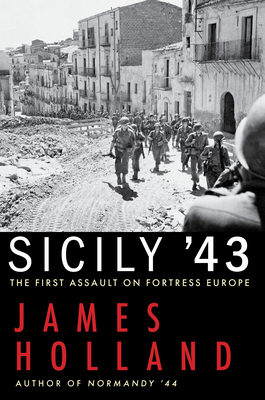 On July 10, 1943, the largest amphibious invasion ever mounted took place, larger even than the Normandy invasion eleven months later: 160,000 American, British, and Canadian troops came ashore or were parachuted onto Sicily, signaling the start of the campaign to defeat Nazi Germany on European soil. Operation HUSKY, as it was known, was enormously complex, involving dramatic battles on land, in the air, and at sea. Yet, despite its paramount importance to ultimate Allied victory, and its drama, very little has been written about the 38-day Battle for Sicily.Based on his own battlefield studies in Sicily and on much new research, James Holland's offers a vital new perspective on a major turning point in World War II and a chronicle of a multi-pronged campaign in a uniquely diverse and contained geographical location. The characters involved--Generals George Patton and Bernard Montgomery among many--were as colorful as the air and naval battles and the fighting on the ground across the scorching plains and mountaintop of Sicily were brutal. But among Holland's great skills is incorporating the experience of on-the-ground participants on all sides--from American privates Tom and Dee Bowles and Tuskegee fighter pilot Charlie Dryden to British major Hedley Verity and Canadian lieutenant Farley Mowat (later a celebrated author), to German and Italian participants such as Wilhelm Schmalz, brigade commander in the Hermann G�ring Division, or Luftwaffe fighter pilot major Johannes "Macky" Steinhoff and to Italian combatants, civilians and mafiosi alike--which gives readers an intimate sense of what occurred in July and August 1943.Emphasizing the significance of Allied air superiority, Holland overturns conventional narratives that have criticized the Sicily campaign for the vacillations over the plan, the slowness of the Allied advance and that so many German and Italian soldiers escaped to the mainland; rather, he shows that clearing the island in 38 days against geographical challenges and fierce resistance was an impressive achievement. A powerful and dramatic account by a master military historian, fills a major gap in the narrative history of World War II.

Twilight of the Gods: War

Say Nothing: A True Story

The Iron Sea: How the All